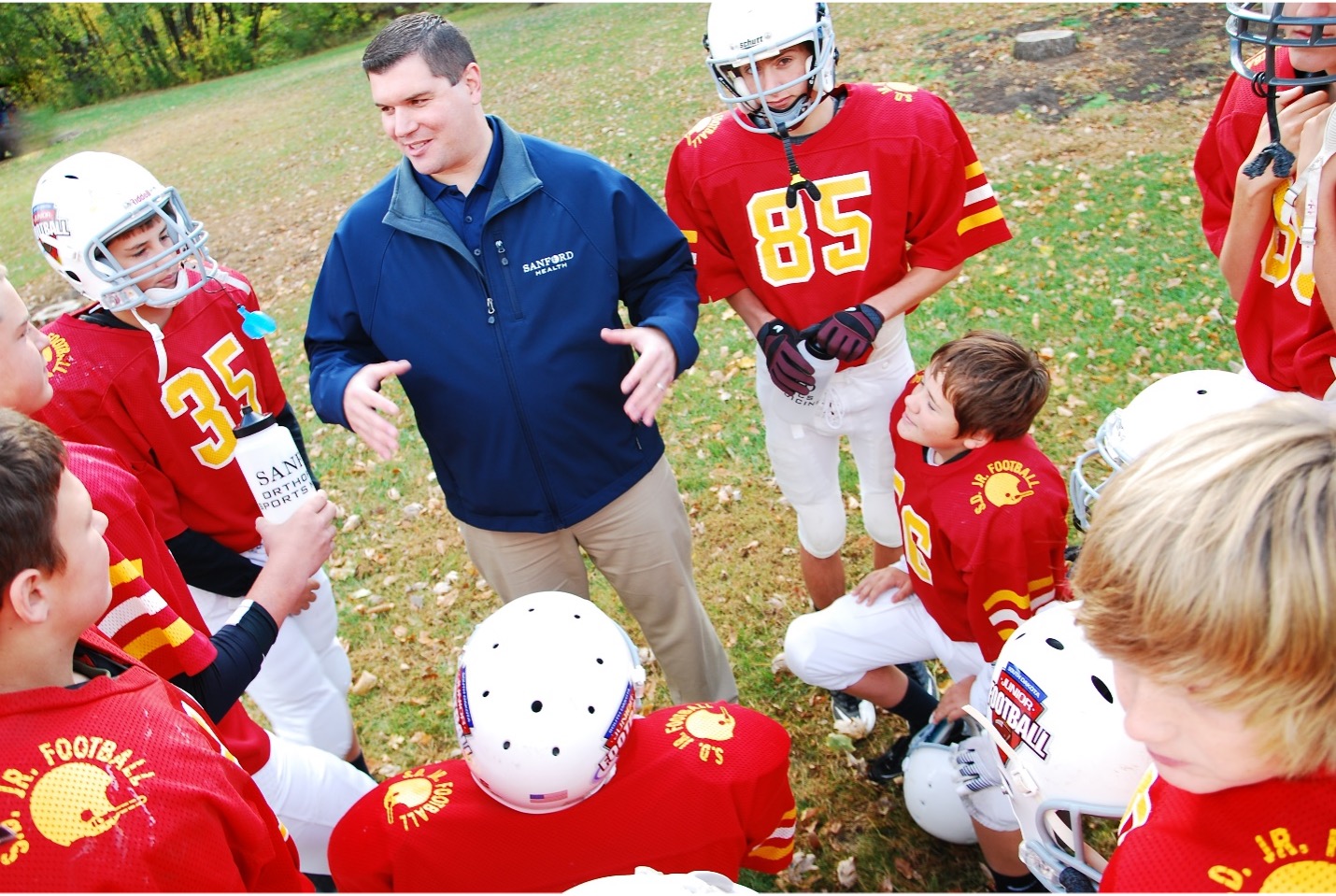 Football is beloved by millions of fans in the United States and is one of the most popular youth and high school sports in the country. Over the past two decades, new information about brain injuries related to football participation has raised serious concerns about the safety of this sport. While most of the tragic stories and alarming data have come from retired professional football players, numerous questions about the risks to younger players have emerged in recent years. From a public health perspective, this makes sense, as approximately 95% of all tackle football players in the US are high school-age or younger. In addition to youth and high school players representing the largest group of participants, there is additional concerns about the effects of concussions and repetitive head impacts on the developing brains of children and adolescents.

Since 2011, my research team at Sanford Health has been studying health and safety issues in youth football. This work has evolved into the First Down Project, with a mission dedicated to improving the health, safety and performance of football players through innovative, high-impact research. Our primary approach has been to assess head impact exposure and neurologic function of youth (middle school) football players. We measure the number, severity and location of player’s head impacts with helmet-mounted impact sensors and perform a battery of neurologic assessments before and after the season. Through this research, we have been able to characterize typical head impact exposures of youth football players in practices, games and throughout an entire season. We have also been able to assess changes in neurologic function and compare any observed changes with individual head impact exposure.

We have discovered that youth football players experience far fewer head impacts throughout a season than their older counterparts. Accordingly, since risk exposure is much different between younger and older players, we have concluded that it is inappropriate to make inferences about health outcomes in youth and high school players from studies on collegiate and professional players. Furthermore, we have found that head impact rates have precipitously declined among the players we have tracked over the past decade. Although we do not know if this trend is occurring nationwide, our observations provide evidence that changes in coaching and/or player behavior can result in safer play.

Studies from other groups have suggested that former football players who began playing the sport at a younger age are at greater risk for long-term brain health issues. While these findings are not consistent across all studies and should be interpreted with caution, the concern they have generated has fueled a movement to prohibit tackle football below a certain age. In fact, over the past several years, legislation has been introduced in six states to ban tackle football below the age of 12 or 14, respectively. To date, none of those bills have passed, but these legislative actions speak to the importance of this issue.

In lieu of tackle football, flag football has been recommended as a safer alternative and an entry point to the game for those who wish to play tackle football at the high school level and beyond. This version of the game has fewer players on the field, and players are not allowed to block or tackle their opponents. In addition to the lower perceived injury risk, advocates suggest that flag football players are more physically active during play and are likely to receive more health benefits.

While it is reasonable to assume that flag football is safer and promotes greater health benefits than tackle football, there has been little research to support these arguments. Determining this information would be important to help guide public policy in an evidence-based manner and to help parents and their children make informed decisions about their own participation.

In 2020, I received a Great Plains IDeA-CTR Pilot Grant to address these questions. The title of this project is “Injury Rates and Physical Activity in Youth Football: Tackle vs. Flag”.  This work is being conducted in partnership with South Dakota Junior Football, Inc, a community-based youth football organization that offers tackle and flag football leagues of overlapping ages. This league structure provided us with an ideal setting to evaluate injury rates and physical activity between tackle and flag youth football players from the same community.

Despite the COVID pandemic, we were able to collect data in 2020, though the season was delayed and shortened. To assess injury rates, we intended to deploy a smartphone-based app that would allow coaches or designated player safety coaches to track attendance and injuries. Unfortunately, due to uncertainties about the season, rosters were not able to be finalized in time for us to implement this tool. We expect to capture these data in future seasons.

On a positive note, we were able to measure the physical activity of tackle and flag football players. Players on two tackle teams and two flag teams wore small GPS monitors during all practices throughout the season. In addition, the tackle players wore their GPS monitors during games (flag games were played indoors where the GPS monitors were inoperable). GPS monitoring allowed us to measure several indices of physical activity including total distance covered, distance while walking, jogging, or sprinting, work rate (distance / time), and walking/running speed. While we are still analyzing these preliminary data, it is apparent that there are differences in several physical activity characteristics between youth tackle and flag football players.

Through this study and the broader work of our First Down Project, we will continue to pursue the answers to meaningful research questions focused on the health and safety of youth football players. Specifically, we want to generate and share new information so that parents and their children can make educated decisions to minimize their risks and maximize their benefits of football participation.

If you have any questions about this research, please contact me at thayne.munce@sanfordhealth.org.

About the author: Thayne Munce, PhD, FACSM is the Director of the Athletic Health & Performance Lab and an Assistant Scientist in the Environmental Influences on Health and Disease Group at Sanford Research (Sanford Health) and is also an Associate Professor in the Department of Pediatrics at the University of South Dakota Sanford School of Medicine.

Combating sex trafficking with the help of tattoo artists