Siwei Zhao, Ph.D., assistant professor in the UNMC Department of Surgery, was the grand prize winner in the third annual CTR Superstar Competition, held in October by the Great Plains IDeA-CTR Network.

Approximately 250 attendees came from across the country for the annual meeting, which this year focused on innovation and entrepreneurship in CTR.

In the Superstar competition, during which scientists “pitch” research ideas to a panel of judges, Dr. Zhao highlighted a project that introduced a novel ionic circuit-based ocular drug delivery device. Dr. Zhao was awarded $20,000 in pilot seed funding to expand the idea.

An anonymous donor also contributed another $10,000 seed grant award, which went to the University of Nebraska-Lincoln’s Angela Dietsch, Ph.D., for her project on sensory manipulation in dysphagia recovery.

Judges for the competition included:

“We were proud to host clinicians, basic and clinical scientists, community members, educators, and administrators at our meeting,” said Matthew Rizzo, M.D., chair of the UNMC Department of Neurological Sciences. “We welcomed a diverse set of ideas and backgrounds as we continued strengthening our network to build CTR and, ultimately, improve the health of individuals across our region.” 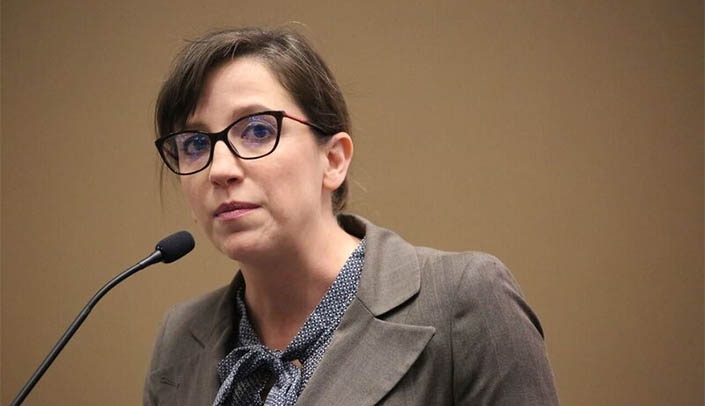 Loretta Jophlin, M.D., Ph.D., assistant professor in the UNMC Department of Internal Medicine, Division of Gastroenterology and Hepatology, gave a 10-minute pitch about her research that netted her a one-year, $20,000 pilot grant.

A panel of judges awarded Dr. Jophlin the top prize in the Superstar Competition during the Great Plains IDeA-CTR Annual Scientific Meeting, hosted by UNMC on Oct. 10 and 11. The event brought together about 200 people interested in clinical and translational research.

“To compete alongside two other enthusiastic scientists, doing vastly different patient-oriented research, was like no other experience,” Dr. Jophlin said. “It was a real challenge to explain the global burden of fatty liver disease, the current deficits in our diagnostic modalities, and how this research can improve care for patients in just 10 minutes. By the end of the 10 minutes, I was winded!”

“Creating a diagnostic test to differentiate NAFLD from ALD would fill a much needed void in the realm of hepatopathology,” she said. “Currently, hepatologists and pathologists often cannot determine the cause because they look so similar under the microscope using our current diagnostic modalities.”

Dr. Jophlin’s overall research goal is to better understand the pathophysiology of fat-storing lipid droplets in fatty liver diseases and how the droplets can be harnessed as therapeutic and diagnostic targets. She said that determining the lipid droplet phenotype of NAFLD and ALD when they coexist in a single patient will be cutting edge as it may reveal new therapeutic targets effective in both diseases.

“This funding is critically important to the research I would like to accomplish in the next year,” Dr. Jophlin said.

She said that the funds will be used for the specialized reagents and antibodies needed to develop the diagnostic test, acquisition of bona fide NAFLD and ALD liver tissue samples for validation studies, and expanding the UNMC Tissue Biobank — a resource available to all researchers — to include liver tissues from the patient population.

Dr. Jophlin, who joined the UNMC faculty in August, said that this award along with the help of her mentors and other collaborators will make it possible for her to launch her career as an investigator.

“I am thrilled to be supported as a physician-scientist at UNMC and the Omaha VA,” she said. “This environment for a young investigator is special in that it is so rare. The culture that the Great Plains IDeA-CTR and UNMC has created in fostering collaborative research and supporting new ideas from early investigators is remarkable.”

“I tried to keep it lighter than I would have for a roomful of neuroscience Ph.D.s,” Dr. Warren said. In this “Shark Tank”-like environment, it worked.

The esteemed panel of judges awarded the assistant professor in the UNMC Department of Neurological Sciences the top prize for a research study that will attempt to improve memory in older adults through noninvasive brain stimulation.

“I was honored to be selected,” he said. “And, I’m thrilled to take the next steps to bring this project to life.”

The two-day event, hosted by UNMC on Oct. 23-24, brought together nearly 200 people interested in clinical and translational research including representation from the National Institutes of Health and research partners from North and South Dakota, Nebraska and Kansas.

Said keynote speaker Christopher Austin, M.D., director, National Center for Advancing Translational Sciences, NIH: “I enjoyed the opportunity to learn more about the Great Plains IDeA-CTR’s work – including efforts to train the next generation of translational researchers – and sharing my vision for how NCATS-supported investigators could collaborate with CTR researchers to advance mutual translational science goals.”

The most common cognitive complaint in healthy aging, he said, is that memory gets worse. “If we can demonstrate that this technique improves memory in healthy older adults, then we can try it in individuals with mild memory impairment. The long-term goal will then be to extend it to patients with Alzheimer’s disease.”

Dr. Warren is in the process of obtaining IRB approval on the study titled “Targeted transcranial magnetic stimulation to improve hippocampal-dependent declarative memory abilities in older adults,” before issuing a limited call for subjects.

“Memory and cognition have been lifelong interests of mine,” said the son of two psychologists. “Loss of memory changes identity and independence radically and I want to help individuals, families, and our society address age-related changes in memory, whether healthy or non-healthy.”